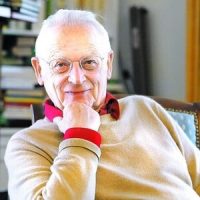 French sociologist and economist, born in 1925, he first became known for his studies in the sociology of work in his Évolution du travail aux usines Renault (1955). Later, he developed a so-called "actionist" sociology in order to foresee the passage from industrial to post-industrial societies in Sociologie de l'action (1965) and in Production de la société (1973).

Always linked to the prestigious Écoles des Hautes Études en Sciences Sociales, one of his main interests in his career has been social movements, from Latin America, Poland to May '68. Since 1974, he has practiced an original form of participatory observation, "sociological interventionism", and has been particularly interested in the study of new social movements (student, regionalist, ecological movements, etc.).