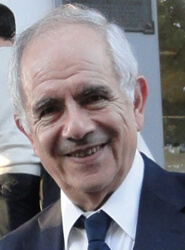 In 2015 he was appointed Emeritus Professor of the UNLP. He was a member of CONICET until his retirement (2015). He was Deputy Director of INIFTA (2002-2009). He currently teaches Physical Chemistry I and Physical Chemistry II for Chemical Engineering students. He is a member of the CEC-Ambiental of the Chemistry and Environmental Technology career and a member of the Academic Committee both at the Faculty of Exact Sciences. He published more than 100 papers in international journals mainly in the fields of Physical Chemistry, Photochemistry, Photophysics and Molecular Physical Chemistry and a similar number in national, regional and international Scientific Meetings and Congresses. He is currently president of the “Fundación Ciencias Exactas” since 2015. He was Argentine representative in the framework of RECyT-MERCOSUR from 1996 to 2015. He is responsible for the official publication “Industria y Química”, of the Asociación Argentina de Química (AQA), of which he is currently its Vice President.