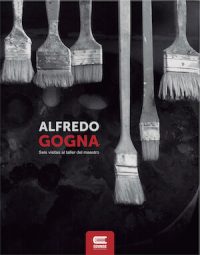 Alfredo Gogna was born in Tandil city in Buenos Aires, in 1930. He was the youngest of four siblings. His father, Francisco, son of Italian immigrants, a quarry worker and an anarchist, took him to attend since a very youn age to the union`s meetings. In the North of Argentina, he met Eneas Spilimbergo. Gogna joined the great project of the Argentinian painter to set a muralist’s school in Tucuman, inspired by the experience of the Mexican painters like, Siqueiros, Rivera and Orozco. By 1985, Gogna had already developed in Santiago city a notable artistic scene, shown by the magnitude and singularity of his work, by the new artists and disciples that appeared, by the numerous exhibitions in national and international galleries, and by the prizes and awards received. His works were exhibited in the Paláis de Glace and the National Museum of Fine Arts (Argentina), and also at museums and private collections in Europe, Cuba and the US. He died in 2008.