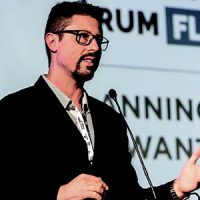 Advertising man, post-graduated in marketing and MBA in strategic direction. Special Advisor on Intelligent Management and Innovation in the Paraná State Government. Leader of the Paraná Serviços app project, a successful case of income and employment generation through the digital connection between workers and contractors in the state. He’s also a professor of courses related to innovation and marketing in universities such as FGV and PUCPR. He has more than 300 lectures performed in Brazil and abroad. He’s the author of four books on innovation, having published the first book about social media in Brazil in 2005, followed by the books: Digital Generation (2008), The Revolution of Social Medias (2010), The Feasible Entrepreneur (2013). He is the co-founder and marketing director of iCities, a pioneer company in events, consultancy, projects and solutions for the Smart Cities segment. The iCities represents FIRA Barcelona in Brazil, a Spanish public consortium, formed by the Barcelona City Hall, the Government of Catalonia and the Chamber of Commerce of Barcelona, being responsible by the Smart City Expo Curitiba, Brazilian edition of the largest conference in the world on the Smart Cities topic.