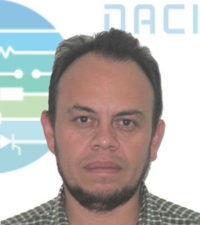 Andres Rosales received the title of Electronics and Control Engineer from the Escuela Politecnica Nacional (EPN), Quito, Ecuador, in 2001. In 2009 he obtained his Ph.D. in Control Systems Engineering. Since 2011 he is a Principal Professor of the Department of Automation and Industrial Control (EPN). Visiting researcher (University of Hannover, Germany, 2007-2008). He was Director of Research and Social Projection of the EPN (2015 and 2017). He was an Advisor to the Ministry of Electricity and Renewable Energy (2010), First Secretary of the Embassy of Ecuador in Spain (2016), CEAACES General Technical Coordinator (2014-2015), and Editor of the EPN Journal (2012-2014). He was also the Research Coordinator of the Ecuadorian Network of Universities and Polytechnic Schools for Research and Postgraduate REDU (2012-2014 and 2017). He is currently a Representative of the Professors at EPN.