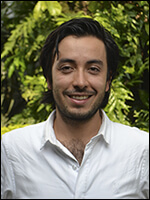 Yoga student, teacher and urban cyclist. He obtained his Ph.D. at the University of Maastricht in 2014, and since then is an affiliated researcher at the United Nations University Maastricht Economic and Social Research Institute on Innovation and Technology (UNU-MERIT), within the Research group(s): Sustainable Development, Innovation and Societal Transitions. He serves as the Academic Coordinator at the Centre for Urban and Environmental Studies –urbam– at EAFIT University, where he coordinates the Master’s in Urban and Environmental Processes, and the internal research projects. He also participates as one of the researchers in PEAK Urban; a multinational project led by Oxford University, in alliance with EAFIT University, Cape Town University, Peking University and the Indian Institute for Human Settlements. He was the director of the 4th World Bike Forum, Medellín (2015). Due to that role and other art and urban activism initiatives, he was granted the 2015 “Future Sustainability Leader” Prize by the Danish Think-Tank Sustainia, and nominated to the “Inspired Leadership Award” by The Performance Theatre in London.