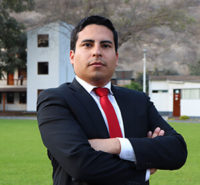 Full-time professor of the Corporate Law Career at Universidad ESAN. Doctor in Public Law from the University of Paris-Nanterre (France) with a thesis on the evolution of social rights in Western Europe and its influence in Andean America (thesis postulated, unanimously by the jury, for a research award), Master’s summa cum laude in Human Rights and Peace Education from the Universidad Nacional de Costa Rica and master’s degree in Public and Private Law from the Evry-val-d’Essonne University (France).
He has been a researcher at the Laboratory of Legal Anthropology in Paris, at the Sorbonne University; professor at the University of Nantes; and ordinary professor, by public competition, at the University of Paris-Nanterre; also legal advisor to the Embassy of Peru in France. Since 2013 he has been co-director of the Peruvian-Franco-German summer universities and co-organizer of the Franco-German-Japanese academic meetings. In Peru, he has served as a research specialist in the Presidency of the Council of Ministers and in the Ministry of Defense. He was also an opinion columnist for the official newspaper El Peruano.

His axes of specialty and academic publication are constitutional law, social inclusion, customary law, the cultural relativism of human rights, and the theory of the social rule of law.