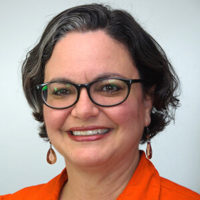 Director of the Latinx and Latin American Studies Program and Professor of Planning with tenure in the Department of Architecture, Urban Planning and Design (AUPD) at the University of Missouri, Kansas City (UMKC). Before joining UMKC in 2016, she was the Latin Lab Director and Associate Professor of Urban Planning in the Graduate School of Architecture, Planning and Preservation at Columbia University, New York City. She got her PhD from the University of California at Berkeley and has two master degrees. In her research and teaching, she explores the interactions of culture, politics, and placemaking, and their impact on community development and socio-spatial justice in Latin American cities and US Latinx and immigrant communities. Irazábal has published academic work in English, Spanish, Portuguese, and Italian. She is the author of Urban Governance and City Making in the Americas: Curitiba and Portland (Ashgate, 2005) and the editor of Transbordering Latin Americas: Liminal Places, Cultures, and Powers (T)Here (Routledge 2014) and Ordinary Places, Extraordinary Events: Citizenship, Democracy, and Public Space in Latin America (Routledge 2008, 2015). Irazábal has worked as consultant, researcher, and/or professor in multiple countries of the Americas, Europe, and Asia.