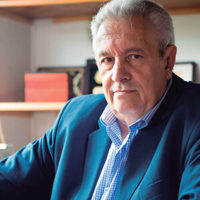 He is a specialist in university policies and management, with a broad academic background including two doctoral and four post-doctoral degrees. As an economist, he obtained a master’s degree and completed several specialisations. He is considered as a “universitologist” in the Latin American region. In Argentina, he is an advisor to the Catholic University of Salta and the coordinator of the Doctorate in Higher Education programme at the Inter-American Open University, Austral University and University of Rio Negro. He is a researcher at the Faculty of Education of Business University and he is a researcher in the National Researchers System of Uruguay. He is the Director of the Virtual Learning Observatory (Virtual Educa) and former Director of the UNESCO International Institute for Higher Education in Latin America and the Caribbean, Vice-Chancellor of the National Institute of Advanced Studies of Ecuador, and Dean of the Faculty of Business Sciences. In Uruguay, he was also Director of the National Book Institute, Director of the National Television System and Vice-President of the Official Broadcasting Service. He is the author of 27 books, and was granted the Uruguayan Literary Award for 3 of them. He has also been granted seven Honorary Doctorates by different universities in Latin America.