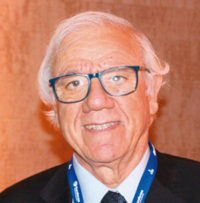 Dr. Fernando Vio del Río is a doctor of internal medicine from Pontifical Catholic University of Chile , Master of public health, Jhon Hopkins University and Post Doctoral Associate ,Division of Nutritional Sciences, Cornell University . Honorary member of the Chilean Academy of medicine of the Institute of Chile.
He resided in Medellín,Colombia from 1974-1980 where he specialized in allergies , has worked as a doctor of internal medicine and allergies so far.
Since his return to Chile in 1980 , he joined the institute of nutrition and food technology (INTA) of the University of Chile where is Titular Professor since 2000 and was its director from 2002-2010.
Since 2004 , Dr. Vio is the President of the corporation “5 al día Chile” . From 1987 until 2002 he worked as a consultant for the world bank in health and nutrition for latin America . He has Manu publications in magazines ,books,chapters of books and monographs in addittion to publications on mass media .