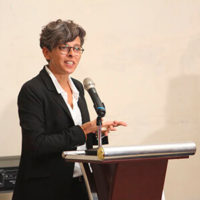 Elena Brugioni is Professor of African Literatures and Postcolonial Studies in the Department of Literary Theory at the State University of Campinas and Professor in the Graduate Program in Literary Theory and History at Unicamp. She has published and developed research in the areas of Comparative African Literature, Indian Ocean Studies (Indian Ocean Studies), Postcolonial Theory and Comparative Literature. Hers current research interests focus on literary cartography and critical paradigms for the study of contemporary African literature and visual narratives in a comparative post-colonial perspective.