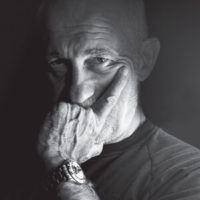 He was born in Italy and completed his higher education in Rome. Since the end of 2014 he has lived in Lima, where he founded the Imago Mundi photographic studio and the Círculo de Cultura Fotográfica Agorá. He studied architecture at the historic Faculty of Valle Giulia in Rome and, at the same time, began to provide architectural and interior design photo services. By the end of the 1990s, he began to collaborate with an Italian publishing house specialized in travel books and to edit numerous photographic books. In the 2000s he documented important architectural works, such as the new Auditorium in Rome by architect Renzo Piano, the National Museum of 21st Century Art in Rome (MAXXI) by architect Zaha Hadid, and the Giubileo Church by architect Richard Mayer. In 2015 he published his first photographic book: El desierto costero de Ica. Currently, he is a disseminator of photographic language at Círculo de Cultura Fotográfica Agorá and, as a photographer, he addresses industrial areas of the construction and mining sectors in Peru. He was recently chosen by the Italian company Astaldi, for the photographic documentation of the E-ELT, the largest telescope in the world, which will emerge in the Atacama Desert in Chile.