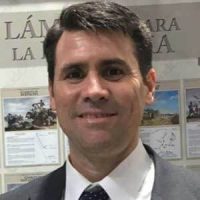 Cavalry officer of the Argentine Army, as well as a Bachelor of Applied Mathematics from the Military School of the Argentine Nation in 2002. On his first assignment in the Argentine Patagonia, he gained experience in the operation of the SK105 A1 and A2 tanks. Then in the Cavalry School he was professor and head of the Armored Instructor Course and of the TAM2C project tank operation course. He has skills of military paratrooper and armored troops, as well as armored instructor. He has collaborated in the elaboration of the doctrine referred to the operation of armored vehicles, he has published several articles linked to the Revista del Suboficial of the Argentine Army.