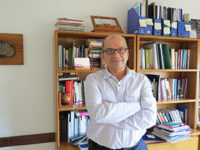 PhD in Philosophy. Professor and dean of the School of Humanities of Universidad EAFIT, in Medellín. Member of the Colombian Society of Philosophy. Participated in the “Historical Commission of the conflict and its victims” established within the framework of the General Agreement between the Colombian government and the FARC.vHe has been a faculty member of Universidad EAFIT since 2005, where he is a senior researcher for two groups Sociedad, Política y Historias Conectadas y Estudios en Filosofía, Hermenéutica y Narativas, both ranked A1 by Colciencias. Over the last 30 years, he has dedicated his research to war, Colombian conflict, urban security, humanitarian law and human rights. El rastro de Caín. Guerra, paz y guerra civil and Guerra civil posmoderna are among his most remarkable work, along with some of his moste recent books Las ideas en la Guerra (2015), Populistas a la colombiana (2018) and Colombia: así en la guerra como en la paz (2018).