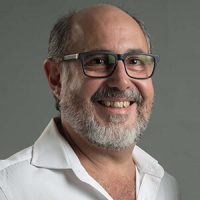 He has been an actor in leading roles for almost thirty years, in about twenty-five plays, and a playwright since 1997, with more than thirty plays staged throughout Argentina and in Venezuela, Puerto Rico, Chile, Bolivia, Mexico and Spain. His plays have been staged by well-known performers and directors. He has given drama and acting workshops since 2005.
He has taught at the Catholic University of Santa Fe (UCSF) for twenty-five years. He has also been the Coordinator of the Culture Department since 2013, the Drama Workshop Director since 2016. Since 2019, he has collaborated as a compiler for the Theatre Collection of the UCSF Publishing House.
He is the founder, playwright, director, and artistic producer of the group “Mucho RIO Educación desde el Arte” (Educating from Art), which stages theatrical performances for primary, secondary and post-secondary school audiences. The productions feature topics related to literature, art, history, and the environment.
He has received almost twenty national and international awards, granted by the National Fund for the Arts, Hueney Library, and the General Society of Authors of Argentina, among others. He received the 1994 Special Award at the Theatre Festival of Santa Fe. He also received the 2010 Mask Award, given by the Municipality of Santa Fe, for his work and contribution to the performing arts. He was awarded 2019 Best Dramatic Comedy in the XV Ibero-American Theatre Festival (Mar del Plata, Argentina). He was awarded the 2019 Grant for Creation in Performing Arts by the Regional Fund for the Arts (integrated by the National Fund for the Arts, National University of the Littoral and the Municipality of Santa Fe).
He was invited to participate in the National Festival of San Martin de los Andes and also in the theatre series organized by the Ministry of Education of the City of Buenos Aires, the National Academy of Tango, the Ministry of Culture of the Municipality of Santa Fe, the Municipality of Crespo, and the Municipality of Ceres, among many others. He was a member of the Technical Jury of the National Theatre Festival 2009 and a member of the Expert Panels for national theatre festivals.
As a storyteller, he has won prizes in national and regional contests, such as the Gaston Gori and Leoncio Gianello Awards, and his works have been published in several anthologies.

Books from this author: 3