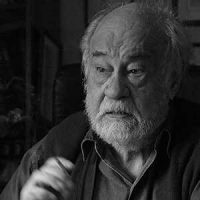 Born in Gualeguay, Entre Rios, in 1919. With no conclusive explanation, Gualeguay is the birthplace of many great writers, Manauta belongs to the second generation of this gualeyo mystery, that emerged with Juan L. Ortiz, Carlos Mastronardi y Amaro Villanueva. Manauta did not only publish the short stories presented in this book but also two poetry books: La mujer de silencio (1944) and Entre dos ríos (1956)—that are part of the volume Complete Poetry by Edunder 2015, and the novels: Los aventados (1952), Las Tierras blancas (1956), which was brought to the big screen and has received national and international recognition. Papá José (1958), Puro cuento (1971) and the re-edition of the latter Mayo del 69 (1994). Some of Manauta’s work have been translated into Rumanian, Czech, Slovakian, Portuguese and French. In 1995 he was awarded with the Fray Mocho Prize for his tales book October Hills (Colinas de Octubre). In 2012 he was also awarded an honorary degree by the National University of Entre Rios.