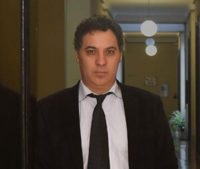 He studied literature in Rosario, philology in Madrid, and got his PhD in Literature at Buenos Aires University. He held a scholarship of the Spanish National Research Council and was a visiting scholar at Pennsylvania University. He was a guest lecturer at New York University and the Technology Institute of Monterrey. Among his books, we find Internet: The Last Continent [maps, e-topias, bodies] (2017), Humanities (2016), Journal of An Oil Drinker (2015), Untitled. Mixed Technique (2012), The digital canon_ School and Books in the Ciberculture (2011), and Past_ Writings, Traditions and Futurism of the 21st century (2011). He teaches postgraduate seminars at the Master’s degree in Literary Studies and at the Doctoral degree of the School of Philosophy and Literature of UBA, and he is also professor at the National University of Arts.