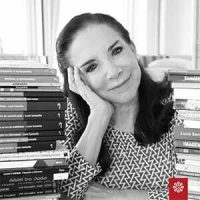 Level 1A researcher at the Brazilian National Council for Scientific and Technological Development (CNPq), and is the head of the post-graduate program in Technology Intelligence and Digital Design at the Pontifical Catholic University of São Paulo (PUC-SP). PhD in Literary Theory from PUC-SP, and a Degree in Communication Sciences from the University of São Paulo (USP). Professor Santaella has supervised over 245 master’s and doctoral theses. Author of 43 books and organizer of 16, besides having published over 400 scientific articles in academic journals in Brazil and all over the globe. She has already received various Jabuti Awards (2002, 2009, 2011, 2014), one of the most traditional and prestigious literary prizes in Brazil, and also the Sergio Motta Award (2005) and the Luiz Beltrão Award (2010).