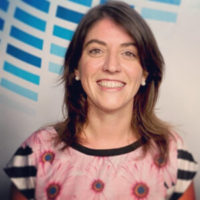 María Clara Lucifora is a PhD (2016) and Professor (2008) in Letters from the Universidad Nacional de Mar del Plata (Argentina) and Master Mundus Crossways in European Humanities (2011) from the Universidad de Santiago de Compostela (Spain) and University of St. Andrews (Scotland). She completed this Masters thanks to a scholarship awarded by the European Commission. Between 2011 and 2016, he obtained several research scholarships, awarded by UNMDP and CONICET. Since 2008, she is a researcher in the group: “Semiótica del discurso”, based at the Centro de Letras Hispánicas (CELEHIS-UNMDP). She is Teacher in the Chair of Semiotics in the Faculty of Humanities and the Faculty of Economic and Social Sciences, UNMDP. He has taught undergraduate and postgraduate courses at various Spanish universities (Santiago de Compostela, Zaragoza, Menéndez Pelayo). She is currently Director of the Escuela de Humanidades, at FASTA University and since 2011, she is Editor of In Itinere. Revista digital de Estudios Humanísticos, from the same University. Since 2008, he has published several scientific articles, book chapters and reviews on semiotics, literary theory, contemporary Spanish literature, among others. In 2020, he published a book of his authorship: Authorial Masks. Analysis of autopothetics and has in press a co-directed book: An Ancient Gift of Flow. The song, between music and literature. In addition, she has attended as a speaker numerous congresses and conferences of her specialty.