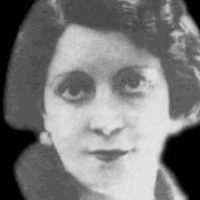 Born in La Plata, in 1898. She belonged to a conservative family. Despite her father’s prohibitions, she entered into the journalistic field as well as in the social environment of tango and nightclubs, taking part of the so called “writers of margins”. She got married and then separated, had a son and was the couple of Enrique González Tuñon. She lived in Spain between 1933 and 1937 and wrote for many Republican publications.