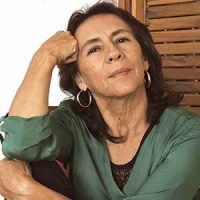 Poet and narrator, graduated from the Sociedad General de Escritores de México, Sogem. She has been part of poetry, narrative, dramaturgy and script workshops in Spain and Mexico. Her work has been published in journals and anthologies in Colombia, Ecuador, Mexico and France. In 2010, she won second place in the Concurso Ediciones Embalaje del Museo del Rayo, with her collection of poems Y cae y suena y nos invade; in 2011, she won the first site of that same contest with the work La luz. Poemas de sombra. In 2012, she was awarded third place in the Premio Nacional de Cuento La Cueva, with the text Cinco minutos, and in 2013 with Honorable Mention of the Premio Nacional de Poesía Ciudad de Bogotá for the book Los sombra. Other of her published titles are Las poetas del megáfono, La tortuga feliz, y Álulas.