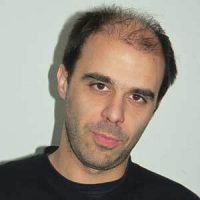 Graduated in Psychology at the University of Buenos Aires and worked as psychoanalyst in several institutions. He obtained the first honorable mention in the Julio Cortázar Short Novel Award organized by Alfaguara and the government of the city of Buenos Aires. His novels were shortlisted in the Tiflos and Carolina Coronado awards, both from Spain. Nowadays he works as a professor of Latin American Literature in France.