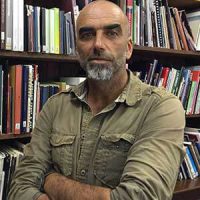 Professor at the Department of Archaeology and Heritage Studies at Aarhus University. He was founding editor of the journal Archaeologies: Journal of the World Archaeological Congress. In 2004-5 he was based at Harvard University as a Mandela Fellow. In 2008 he was a Visiting Professor at Brown University,  and in 2009 at the University of Basel. He has published widely on questions of archaeology and society in Africa, and questions of public history and heritage. His books include: Desire Lines. Space, memory and identity in the postapartheid city (Routledge 2007, with Martin Hall and Noeleen Murray), New South African Keywords (Jacana Media and Ohio University Press 2008, with Steven Robins), After ethics (Springer 2015, with  Alejandro Haber) and Arqueología y decolonialidad (Ediciones  del Signo 2017, con Cristóbal Gnecco y Alejandro Haber).