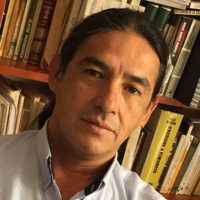 Mexico, D. F. (1968). Degree in Philosophy from the Universidad Michoacana de San Nicolás de Hidalgo. Master in Education from the Autonomous University of Chiapas. Doctor of Philosophy from the University of Salamanca, Spain. Member of the Philosophical Observatory of Mexico, of the Philosophical Association of Mexico A. C., of the National System of Researchers (SNI), Level I, and of the State System of Researchers, honorary researcher. He has published several articles on Latin American and Mexican philosophy. He has recently published the books: Philosophy and life: the philosophical itinerary of José Vasconcelos (2017) and José Vasconcelos: South American conferences and other writings (2019).