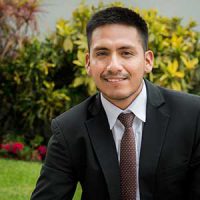 Agronomist from the Universidad Nacional Agraria La Molina (UNALM). Currently, he is a consultant for Agrobanco, the main financial institution in the agricultural sector in Peru which allows him to contribute to nationwide operations by offering agroclimatic risk mitigation strategies and fomenting innovation and entrepreneurship of new, financeable projects. He has developed professionally in several different directions. As a project executor he has won two important contests sponsored by UNALM, OIT, Universia and Sierra and Selva Exportadora. As a producer, he was a pioneer in the introduction of blueberry farming to Peru and made up part of the technical team of important businesses in the sector, such as Grupo Arato and Frutícola La Joyita. Meanwhile, as an entrepreneur he has been technical manager of the company Crops Perú, pioneer in the production, gathering and commercialization of quinoa and other native grains along the Peruvian coast.