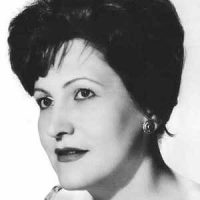 Graduated as Language teacher and translator at the National University of Córdoba, and started her career in journalism in the 50s. She published the novels Gente conmigo, Extraño oficio and Amor de alas, and the short story books Línea de fuego and Botella al mar, among others. Gente conmigo, first published in 1961, was adapted into a movie in 1965, and translated into four languages. Poletti was also an outstanding figure of literature, in which her most relevant books are El misterio de las valijas verdes, Reportajes supersónicos, and El rey que prohibió los globos.