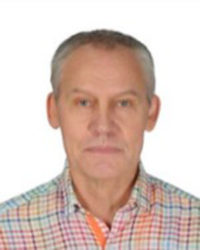 He studied Chemistry at the Russian University Druzhby Narodov (U. of Peoples’ Friendship) (Moscow, Russia), where he received his Laurea M.Sc. (1981) and Ph.D. (1986) degrees in Organic Chemistry. In 1990-1992, he carried out postdoctoral studies at the Enrique Moles Institute of Organometallic Chemistry of the University of Oviedo (Spain). In 1994, he completed post-rehabilitation obtaining a Doctor of Chemical Sciences (D.Sc.) degree and was appointed Senior Lecturer at the Russian Druzhby Narodov University. In the same year, he started working at the Industrial University of Santander (Bucaramanga, Colombia), where he is a Laureate Professor and director of the Laboratory of Organic and Biomolecular Chemistry attached to the School of Chemistry. Since then, he has received several awards in pharmacology, oncology, and phytopharmaceutical sciences. In 2012, he received the National Science Award, Colombian Association for the Advancement of Science. In 2014, he became a corresponding member of the Colombian Academy of Exact, Physical and Natural Sciences.