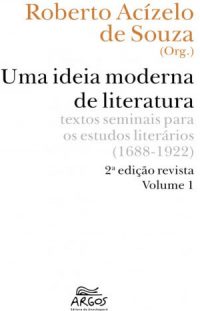 In a period that extends from the late seventeenth to the early twentieth centuries, the verbal arts go through a process of true reinvention, configuring a transit that would lead from the old concept of boas letras to the modern idea of literature, through the intermediate notion of belas-letras. In disciplinary terms, this process implies displacement of the literary object, from the scope of the ancient classical discourse arts – the grammar-rhetoric-poetic triad – to the emergence of emerging knowledge in modernity: aesthetics, criticism and literary history. It is possible to follow this trajectory in the work of literary philosophers, rhetoricians, poets, fictionists, critics and historians who have reflected on the various aspects of literature, from their mode of being to the correlative questions of the principles and methods for their study and critical evaluation.
This book, encompassing the great linguistic-literary traditions of the West – German, Anglo-American, French, Hispanic, Italian, Luso-Brazilian and Russian – brings together a wide range of representative texts of this route (many unpublished in Portuguese), in careful and carefully annotated editing. Selection, on the one hand, welcomes a variety of perspectives (“The ontological reflection”, “The system of the arts”, “The issue of genres”, “The principles and rules of art”, “The methodological reflection”, “The rhetorical analysis”). On the other hand, it maintains the thematic unit, by limiting itself to seminal works dedicated to discussing the concept of literature, in its correlation with the problem of the object, method and critical-analytical procedures proper to literary studies.