A nordic count in the Caribbean: Fredrik Thomas Adlercreutz’ presence in Colombia, Jamaica, and Venezuela, 1820–1849 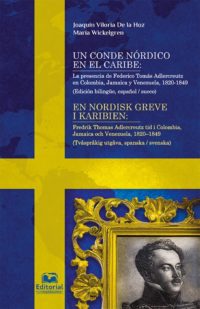 A nordic count in the Caribbean: Fredrik Thomas Adlercreutz’ presence in Colombia, Jamaica, and Venezuela, 1820–1849

Count Fredrik Thomas Adlercreutz was born in Finland, in the bosom of an old Scandinavian noble family. He had a first-class education and became an aide to the king and an outstanding diplomat. Due to financial problems, he was forced to leave Sweden, his homeland, at the end of 1819. He traveled to London, where he joined the Irish Legion, and once in America, he joined the Liberation Army. . Adlercreutz stayed in America for nearly three decades, between 1820 and 1849, and his presence undoubtedly strengthened Sweden’s relations with the South American republics of Colombia, Venezuela, and Ecuador. This bilingual edition is published in 2020, when the Bicentennial of the Independence of the Santa Marta province and the 200th anniversary of Count Adlercreutz’ arrival in the Gran Colombia Caribbean are commemorated. Besides, Nordic countries are the special guests of the 2020 Bogotá International Book Fair (FilBo).