ABORTION IN ECUADOR: FEELINGS AND ASSEMBLAGES 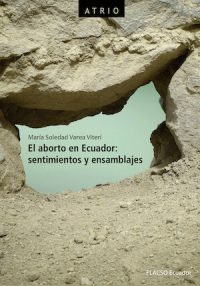 ABORTION IN ECUADOR: FEELINGS AND ASSEMBLAGES

Soledad Varea tells us about the abortion in legal terms in Ecuador that since 2004 has come a standstill subject when the Health Law was discussed. In this book, the author merges female voices from feminist movements, indigenous women, workers from the public sector, Opus Dei members and volunteer elite women. From their emotional standpoint, they talk about abortion, about their political work to legalize it or ban it, and about their feelings from having this procedure. Varea starts with an uncommon explanation in academic studies, one between state and feelings. She shows how the state materializes itself in actions of the people who carry out public policies while interacting with women immersed in an emotional situation. The author exposes that feelings are essential for feminisms in Ecuador just as much as for conservative pro-life women. Outrage for deaths and the role of affection towards the unborn children are central to the public debates. She offers a renewed focus for an academic reflection that is both compromised and captivating about the sharpest edge of debates on sexual and reproductive rights.