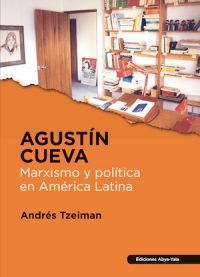 This book intends to go through different stages in the theoretical production of the Ecuadorian sociologist Agustín Cueva. He investigates a tension that is present throughout his intellectual trajectory: a clash of impulses that occurs in his work between, on one hand, the adoption of the classic Marxism concepts (Marx, Engels and Lenin) and on the other, making categories in the study of Latin American reality. In this way, Andrés Tzeiman’s book intends to look transversally at the intellectual Ecuadorian’s work, placing focus of attention on that vocation that opens a place and condenses one of the most fertile instincts in Agustín Cueva: understanding socio-economic formations as the space where Marxism is realized, and where classes organize and fight as historical subjects to end capitalist domination.