AND THE LITERATURE, TODAY? STUDIES OF CRITICISM, HISTORY AND LITERARY THEORY 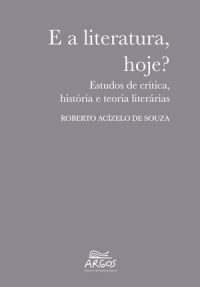 AND THE LITERATURE, TODAY? STUDIES OF CRITICISM, HISTORY AND LITERARY THEORY

As in the book Variations on the same theme (Chapecó: Argos, 2015), this volumen includes papers that are representative of the author’s specialized studies. Homogeneous as to the conceptual perspective adopted, the essays and interviews gathered here, most of them produced in the period from 2014 to 2016, are diversified as to their themes and objectives. They deal with contemporary literary and socio-political-cultural issues, such as the place of literature and humanities in the age of diversity -, but also with historical problems such as novel conceptions prior to the consolidation of the modern pattern of genre. The texts are characterized by the objectivity and rigor expected from the academic writing, as well as clarity and fluency, which is recommended to readers of the most diverse backgrounds.