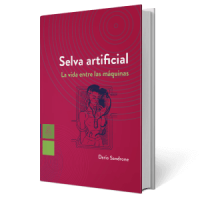 It is not the least of the merits of artificial jungle to recover the sense of adventure of knowledge. With his clear and distinct prose, Darío Sandrone invites us on an excursion through the world of technology, philosophy, science and literature, on a tour that offers both the wonders of curiosity fairs and the most pungent pleasures of critical reflection. It is a set of short texts, in which Sandrone not only demonstrates a rare ability as a scientific and technological popularizer but also a remarkable narrative talent. He knows how to put suspense and humor on a controversy about locks or the vicissitudes of the invention of air conditioning. Thus, although they are miscellaneous and address different topics, the articles put together series that go beyond the sections in which they are ordered ("Machines", "Artifacts", "Cultures", "Policies") and generate an addiction almost novelesca.