AUSCHWITZ WITH HIROSHIMA. ABOUT THE GLEAM ON THE MONTAGE LINE 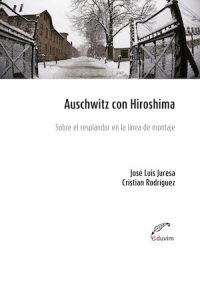 AUSCHWITZ WITH HIROSHIMA. ABOUT THE GLEAM ON THE MONTAGE LINE

Psychoanalysis is considered to be a strange science which function is to situate something that has no identity, that does not relates the subject with him or herself by other means but by getting—their identity—lost in that same act of placing them in situation. If Psychoanalysis is that, then referring to this science as a discourse about the accumulation and concentration of objects regarding identity is the least that can be said about it. The way its discursivity proceeds locates it at the back side of another discourse, that of the master, and particularly, in the “other side” -also at the back- of the fake discourse of the capitalist master. Let’s be clear: in Lacan, discourse means to say “social bond”, kinds of social bond which constitute what is called “culture”. It is precisely culture, though, that is endangered in face of the potential threat represented by the workings of the deregulated capitalism in its current stage of financial predominance. It is also because it is about a fake discourse which trend moves towards the destruction of social bonds.