Between War and Peace: the places of the Colombian diaspora 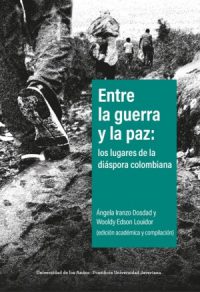 Between War and Peace: the places of the Colombian diaspora

Entre la guerra y la paz: los lugares de la diáspora colombiana is one of the first academic publications in Colombia that provide a multidisciplinary and multisituated approach to the locations that host over half a million transnational victims of the armed conflict within the current peace process.
Ten authors researched the future of the concept of diaspora and the epistemological, legal, and political meanings of the conflicts regarding how to refer to this population: refugees, asylum seekers, victims residing abroad, or people in need of international protection? Their texts also account for the history of transnational struggles and experiences; they capture the questions, concerns, and proposals regarding the legal architecture of transitional justice; the political mechanisms of the post-agreement; and the imperious need to build a new Colombia that is more tolerant, inclusive, and hospitable.