Black People in the World of the Rich 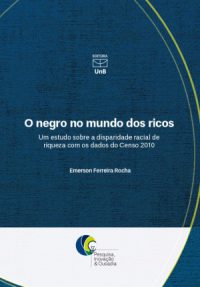 Black People in the World of the Rich

“O negro no mundo dos ricos” (Black People in the World of the Rich) is a product of a doctoral research conducted at the University of Brasília, supported by Conselho Nacional de Desenvolvimento Científico e Tecnológico – CNPq, and at the University of Illinois at Urbana Champaign, supported by Coordenação de Aperfeiçoamento de Pessoal de Nível Superior – CAPES. The book uses data from the latest Brazilian Demographic Census to identify patterns of income inequality between black and white people in Brazil, emphasizing the richest 1% of the population. Thus, the work intends to shed new light on the study of racial income inequality in Brazil, which has focused on differences in the average income or the racial composition of the poorest sections of the population. The intention of the analyses is to identify, from a series of statistical exercises, the role played by processes of racial discrimination on the one hand and, on the other hand, by the educational inequalities between black and white people, including in terms of fields of higher education, determining inequalities observed in the composition of the rich group. Highlighting the interactions between racial condition and gender condition, the book also provides a diagnosis of the situations faced specifically by black women.