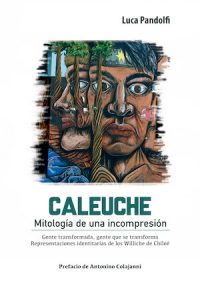 On the Isla Grande of Chiloé, in the south of Chile, there is the legend of Caleuche, a ghost ship that appears at night and attracts sailors with party music to kidnap them and then return them turned into people without reason and without memory. However, this legend does not seem to be part of the tradition of the Williche, a people that settled in Chiloé at least a thousand years before the arrival of the Spaniards in the middle of the 16th century. In their own language, the mapudungun, now little used on the island, Caleuche can mean "transformed people" or "people who run on water" but not "ghost ship". There are thus two traditions, two narrations of past and recent history, two cosmovisions still in conflict. This book gives voice to the two traditions and to the multiple forms of the hybrid local, dialectical, and conflictive identity representations manifested in public and private life, in social, political, and religious events, in the mass media, in school education, and even in tourist advertising and scientific publications.