CENSORSHIP, EXPURGATION, AND THE CONTROL OF LIBRARIES IN COLONIAL NEW GRANADA 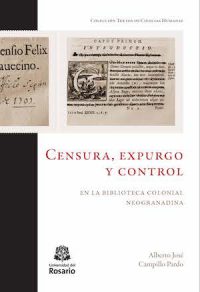 CENSORSHIP, EXPURGATION, AND THE CONTROL OF LIBRARIES IN COLONIAL NEW GRANADA

This work shows how the inquisitorial censorship process worked in Nueva Granada books, specifically in the Santafé libraries. This process will be studied in one of the areas where knowledge could be harmed by its difficult control: private libraries, in order to prove that the Inquisition used censorship as a form of cultural and social domination in the colonial world, reproduce the Catholic mentality. The book is structured in three chapters. In the first one, censorship is analyzed as a positive element, that is, with a creative function that forged the spirit of colonial society. The second deals with the repressive nature of censorship and its role in social and cultural control. The final chapter is dedicated to the expurgo and its different forms, that is, the way in which it was censored.