Cervantes in Regard to the Symbolic Culture of his Age. The Novelas Ejemplares' Testimony 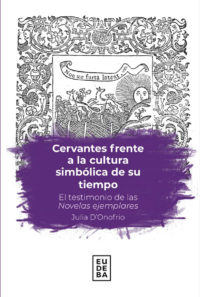 Cervantes in Regard to the Symbolic Culture of his Age. The Novelas Ejemplares' Testimony

In the Spain of the Golden Age, the world could be read like a book that gave signs of its Author; nature provided elements for a deep and spiritual interpretation. For this way of understanding reality, images were privileged vehicles for the diffusion of transcendent senses that could be found in the behavior of animals, the characteristics of certain minerals, the virtues of plants, ancient stories and an inexhaustible variety of wonders. With the charm of such a vision of the world, it should be noted that in this counter-reformist Spain, symbolic speeches also served as a privileged way of manipulating the public to convey an orthodox and conformist exemplarity. This book proposes a reading of the way in which Miguel de Cervantes dialogues with the symbolic practices of his society with which he had a conflictive relationship, an issue that is highlighted here when analyzing the problems raised in his Novelas ejemplares.