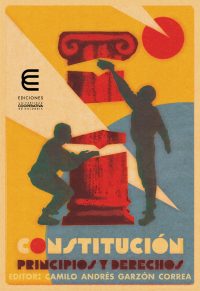 The content of the Political Constitution of Colombia of 1991 has been extensively studied in Colombian constitutional dogmatics. In this book, we analyze several problems that deal with the meaning of the constitution and the scope of some of its fundamental principles and rights. The text is structured in three sections. In the first part, we analyze issues related to the meaning of the Constitution. We consider the problem of disagreements arising from the interpretation of constitutional provisions on the rights of same-sex couples in the jurisprudence of the Spanish Constitutional Court and the Colombian Constitutional Court. In addition, we address the difficulties generated by the identification of essential elements of the current constitution through the substitution test created by the Constitutional Court. In the second part, we deal with the principles of harmonious collaboration and due process. Harmonic collaboration is studied from the classical conceptions of legal thought and due process from the impact that neoconstitutionalism had on basic concepts of procedural dogmatics. In the third part, we propose an analysis of the rights of victims and informed consent in the medical field. We propose a reflection on the rights to reparation, political participation and memory of the victims of the armed conflict in a democracy. Finally, we examine the nature of informed consent and its relationship to fundamental rights. In each chapter we propose analysis proposals on the scope of the interpretative disagreements, the defining elements, the principles and the rights in the current constitution.