CONVERTED OF JEWISH ORIGIN IN COLONIAL CARTAGENA. SOCIAL, CULTURAL AND ECONOMIC LIFE IN THE 17TH CENTURY 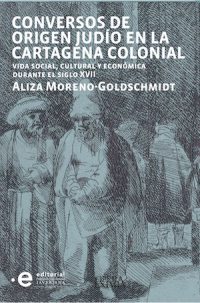 CONVERTED OF JEWISH ORIGIN IN COLONIAL CARTAGENA. SOCIAL, CULTURAL AND ECONOMIC LIFE IN THE 17TH CENTURY

In the year 1492, the ship of Christopher Columbus arrived at American coasts, and the old and legendary Jewish community was expelled from Spain. These facts constituted the beginning of two fundamental processes in the history of the Early Modern Age: on one hand, the European conquest and colonization in America and, on the other, the beginning of the Judeo-Spanish diaspora. This book collects traces of a new meeting point for these two processes a century later in Cartagena de Indias. One through the study of the presence of new Christians of Jewish origin, among the Spanish and Portuguese settlers who came to America, and the other, through the Spanish Inquisition, which pursued different types of heresies and instituted three courts in American territories, one of which was installed at the beginning of the seventeenth century in this city.