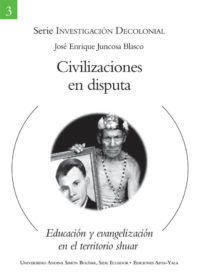 Understand how the Shuar people confronted the three dimensions of the Salesian mission: civilization, evangelization and education, is de matter of this book. Dispute, resistance and appropriation in order to make their differentiated collective existence prevail . Thus, literacy made sense because it offered strategic tools to strengthen their capacities to confront colonization. Late evangelization was assumed as a condition of possibility to articulate the territory and Shuar leadership networks.

The research identifies the underlying civilizational disputes that arise from the relationship between missionaries and Salesians that offer, today, the possibility of removing the civilizing patterns of modern coloniality implanted in the territory. These disputes confront the despiritualization of nature with the Shuar experience of the territory as a sacred sphere of life; the split of the soul and the body with the Shuar spirituality that articulates both instances and the emotions; and the break between existence and knowledge with the contextual and existential knowledge of the Shuar people. Each chapter opens with a ‘conversation’ (aujmatsamu) offered by professional Shuar men and women in which they narrate their passage through the different stages of formal education. They are: Serafín Patti, Rosa Naikiai, María Ana Awak Tentets and José Nantipia, teachers at the Bilingual Intercultural Shuar Achuar Institute of Bomboiza. Their conversations are places from which to open questions rather than materials on which to think or analyze, redirecting the initial research and writing plan in many ways to unexpected places.