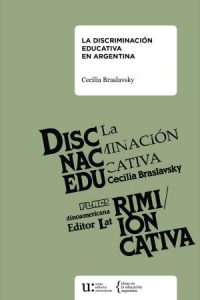 Educational Discrimination in Argentina is a major milestone in the development of critical studies on the educational reality of the country.Published in 1985, it proposes thematic lines different to those becoming dominant in public discourse (such as authoritarianism/democracy). Based on a sample of public schools, it analyzes what school and non-school factors had an influence on students’ transition to secondary school, on their permanence in the education system –which is diagnosed as disarticulated and strongly segmented–, and on their exclusion from it.This work is still today revisited to contrast the categories used and those incorporated more recently to account for new problems.May this new edition –which includes a collective prologue with the voices of Felicitas Acosta, Inés Dussel, Silvina Gvirtz, Pablo Pineau, Margarita Poggi, Claudio Suasnábar and GuillerminaTiramonti– serve as an acknowledgement for this passionate Argentine pedagogue, who passed away when she still had much to say and do about the educational field.