EXHUMATION POLICIES. CRITICS CLASSES IN THE ARGENTINE UNIVERSITY OF THE POST-DICTATORSHIP (1984-1986) 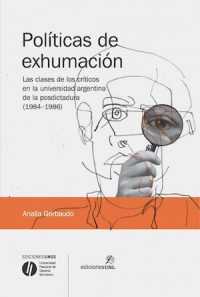 EXHUMATION POLICIES. CRITICS CLASSES IN THE ARGENTINE UNIVERSITY OF THE POST-DICTATORSHIP (1984-1986)

Literature lives from its confused condition, from its misunderstanding with itself: in an imminence of uncertainty that breaks down the borders of subjectivity and at the same time, it is something that is "taught", a "subject" labeled in institutions. Analía Gerbaudo—a university researcher who tirelessly, has covered Derrida’s writing as well as Argentine schools and study plans, literary theory as focus for professors and teachers—establishes in this book some questions about the literature’s condition: what were the fantasies of intervention of the critics that between 1984 and 1986 taught Argentine Literature and literary theory in the University of Buenos Aires? Why exhume those classes and those programs would contribute to the current discussion about the teaching of literature? As in her previous books and studies, Gerbaudo reactivates and continues the debate about the meaning of practice and theoretical knowledge as professors of literature and at the same time, establish herself as one of the most active specialists on these issues.