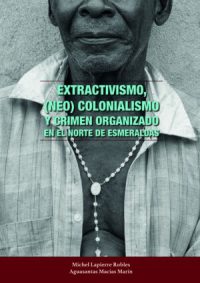 The attacks on the military and police as well as the kidnapping and murder of three journalists (January-April 2018) that occurred on the Emerald border, in Ecuador, surprised Ecuadorian society. In this book and after eight years of research, the authors intend to unravel the historical, structural and current factors that have made northern Esmeraldas one of the most discriminated and forgotten places in the history of Ecuador. The criminal extractive invasion of the last 50 years (wood, palm and gold) explain the current state of violence. Illegality, threat and death are common practices for the irrational exploitation of natural resources and the expansion of the illegal economy. The environmental and humanitarian catastrophe encompasses the destruction of 60% of forest cover, the voracious advance of large palm growers, the illegal traffic of more than 40% of Afro-descendant ancestral lands, the consumption of water contaminated with agrochemicals and heavy metals for more than ten years and extreme poverty that reaches 90% of the population. A perfect example of how the profuse and consensual abandonment of the State, runaway capitalism, crime, historical racism and disinterest in society aggravate the living conditions of indigenous and Afro-descendant communities.