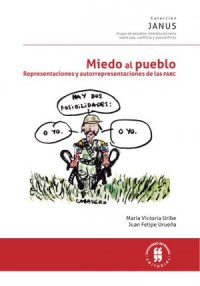 This book presents some visual and discursive representations of the guerrilla group FARC-EP and its relationship of enmity with the Colombian State, during more than 50 years of confrontations. To the effect, the study presents, in the first place, a theoretical framework, which explains the concept of representation in its different meanings, followed by an analysis of images and discourses in the context of five relevant events in the relations between the FARC and the Colombian State: Marquetalia, Dialogues in La Uribe, the Caguán Dialogues, Periods of Uribe Vélez, and the Havana Dialogues. In the second place, the study analyzes the conditions—both institutional and
social—that make it difficult for ex-combatants of the FARC to “reincorporate” in spaces of both political confrontation and social interaction. It concludes by showing that the persistence of stereotypes used by the actors to represent themselves and their enemies in the different phases of analysis are a symptom of a ghost that always returns: a ghost that acts in the shadows and prevents opening of spaces of democratic confrontation to communities traditionally excluded from the space of representation. Faced with this, it is necessary to take a critical distance from these representations to think about the possibility of a space of democratic confrontation in
which differences are not resolved by the physical and symbolic elimination of the rival.