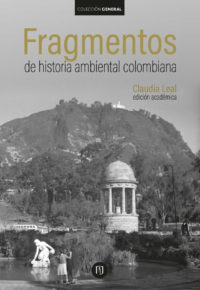 Although Colombia can be represented as a stain on a map, this abstraction ultimately refers to a concrete space that has mountains, roads, cities, and a multitude of ecosystems, a space that can be either hot or cold, with air that can smell either like guava or like fumes. Fragmentos de historia ambiental colombiana includes eleven articles written by historians and geographers from Universidad de los Andes, who study how the natural world has shaped our history and unravel how our past is intertwined with that of the country’s rivers, soils, and forests. An emphasis on 20th century Bogotá reveals why its hills are covered with pine and eucalyptus trees or how the city’s formation over rivers and wetlands has generated forms of social organization. The book also takes us to Valle del Cauca, Cesar, and Atlántico to explore the costs of agricultural modernization, and to Amazonia, Chocó, and La Guajira to reconstruct the history of our forests, which in some cases are still standing while in others, they have disappeared. This book is a decisive contribution to a new field of history opening up in Colombia.