From Colonies to National States. Independence and Decolonization in the Americas and the World in the Nineteenth and Twentieth Centuries 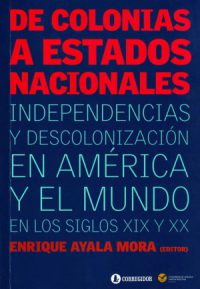 From Colonies to National States. Independence and Decolonization in the Americas and the World in the Nineteenth and Twentieth Centuries

When we think of Independence, the figures of liberators, battles, and masses mobilized by the incentive of liberation in the "heroic times" of the beginning of the 19th century come to mind. With more information and theoretical development, we see the process more as a continental reality in which all Latin American societies and spaces were involved, rather than a a sequence of events restricted to the borders of the current States. We also understand independence within the perspective of the development and rise of a world system articulated by escalating capitalism. Lately, we have even placed greater interest in the participation of women, indigenous, and black peoples, urban and peasant groups. But we have rarely compared our "Great War" with a reality that took place more than a century later: the decolonization process that followed World War II and led to the independence of large numbers of countries in Asia, Africa, and the Caribbean. The independence processes, separated in time by more than a century, had many diverse features, but also common elements since they confronted colonialism in both cases and certain situations influenced world reality. Therefore, we saw these events as an opportunity to make a comparative approach between the Latin American independence in the nineteenth century and the decolonization processes that materialized in the twentieth century with huge international impact, and changed the history of the world in several ways.