García Márquez. A Journey to Havana 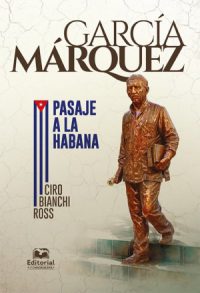 García Márquez. A Journey to Havana

Along with Ernest Hemingway, Gabriel García Márquez is the most widespread non-Cuban writer on the Island. This chronicle unveils, from beginning to end, his ties with Cuba since he became fascinated with Cuban music —Perez Prado, Trio Matamoros— in the Colombian Caribbean and a Felix B. Caignet’s radio soap opera enthusiast. It also recounts his day-to-day life during his stay in Havana (first in 1959 and then from 1975 onwards) to address his fraternal relations with Casa de las Américas and his endeavors for the Fundación del Nuevo Cine Latinoamericano and the Escuela de Tres Mundos. With the same passion, the book portrays García’s admiration for Alejo Carpentier, Eliseo Diego, Lezama Lima, Lisandro Otero and his “bro” Fernández Retamar, his meals, and those boleros enlivened by whiskey he sang a duet with the great painter Roberto Fabelo. His friendship with Fidel Castro is covered in these pages, as well as the narrator’s missions as a secret agent of the mythical Cuban president.