Gender-Based Violence in Crimes against Humanity in Argentina 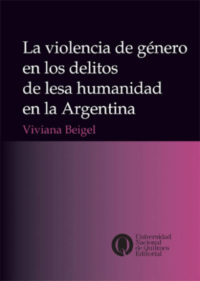 Gender-Based Violence in Crimes against Humanity in Argentina

The horrors of state terrorism are countless in our country. The sinister cycle of human rights blackout left unfading marks, but some events paradoxically led to the initial undecidability or negligence of the judges at the beginning of the crimes against humanity trials. This applies to the torture employed in women, about which I commented once that it was not appropriate to say that they suffered more, but that their gender had maximized the employment of torture as the executioners also represented patriarchal authorities. […] This book is part of the unique contributions to understand the meaning of sexual affronts to female prisoners, as well as the path opened by the gendered perspective in the justice administration field […] The author carried out a detailed research on the suffering of a group of female prisoners specially focusing on the Cuyo region, which makes the contribution even more valuable. She committed herself to evidence that the captivity situation increased largely the legitimating authorization to possess those bodies that the torturers believed that belonged to them. As Viviana Beigel assures, this was a systematic plan the key of which lays in the patriarchal dominance that granted, until recently, the safeguard of impunity.